These are all informative and honest, easy-to-read titles, and make great introductions to the topics they cover.
“Drugs are here to stay. History teaches that it is vain to hope that drugs will ever disappear and that any effort to eliminate them from society is doomed to failure... The drug laws are directly responsible for creating ugly and ever-widening criminal networks that corrupt society and cause far worse damage than the substances they distribute.” (p. 1)
"When the Advisory Council on the Misuse of Drugs recommended that ecstasy be downgraded to Class B in 2008, the government made it clear that no matter what the evidence indicated, they were not going to consider any reduction in the Class A status of Ecstasy." (p.20)
"Even though the Volstead Act made more than half a million people criminals, it did not result in the conviction of the big producers or traffickers in alcoholic beverages; we must remember that Capone was not convicted as a smuggler or an owner of illegal establishments, but for fiscal fraud. With hired killers and corrupt lawyers in his service, amply supported by some politicians, the heads of these enterprises remained outside the reach of the law." (p.84​)
"Fundamentally, the War on Drugs is doomed because neither the methods of war nor the war metaphor itself is appropriate to a complex social problem that calls for compassion, self-searching insight and factually researched scientific understanding. The pertinent question is not why the War on Drugs is being lost, but why it continues to be waged in the face of all the evidence against it." (p.283)
Ending the War on Drugs 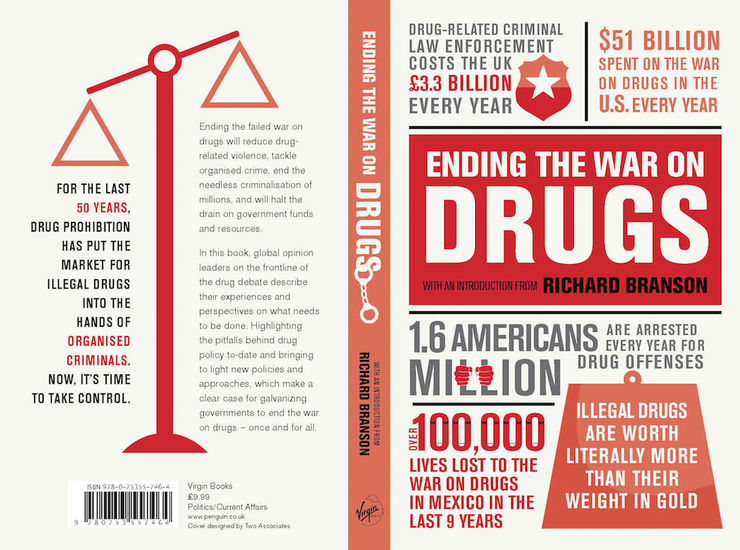 An impressive collection of world leaders, many of them members of the Global Commission on Drug Policy, bring their voices together to speak out against drug prohibition and call for reform. Each of their brief essays highlight their individual reasons for opposing the war on drugs and how it has personally affected them and their countries.

Read the Introduction at Virgin.com or preview at Amazon.
"The other deleterious consequence of criminalisation of drug use is that millions of people worldwide who require essential medicines, like morphine, for treatment and palliative care are unable to access them. This is a direct consequence of excessively restrictive sanctions instilling fear in the medical community of falling foul of the law. The lack of access is particularly acute in developing countries. While over 90% of all legally controlled medicines is consumed in North America and Europe, 70-90% of patients who require these essential medicines in developing countries do not have access to them." - Anand Grover in his essay, “The War on Drugs: A Violation of Human Rights” (p. 74-75)
"Long term systemic failure on its own terms: the UN drug agencies' self proclaimed goal of 'a drug-free world' is, by its own admission, further away than ever. UNODC rhetoric now talks more about 'containment' than 'eradication', but even this position is unsustainable in light of deteriorating outcomes on almost all meaningful measures. " (p.172)
A more lengthy selection of titles can be found at the Erowid Book List and our Library. There's also plenty to read freely accessible in the Schaffer Library of Drug Policy, including full books and chapters from older titles.